An Unforgettable visit to the illustrious past of Kolkata

Lisa Ling has very beautifully captured the significance of travelling in a popular quote-“The best education I have ever received was through travel”. I can’t agree more with her.

Here, I am sharing with you all one of the most exciting part of our travel diaries which provided us a treasurable opportunity to enrich our historical knowledge and please our taste buds.

This plan began solely due to our never ending affection for Bengali Sweets. However, it ended up being one of the most refreshing and memorable travel story.

Our day began with a healthy brunch at The Pearl Kolkata at 12.00 pm. We then headed towards Victoria Memorial before visiting our all-time favourite Girish Chandra Sweets – the famous Bengali sweet shop located behind Presidency College on the kind proposal of our acquaintances at Kolkata.

We reached Victoria Memorial by 12.30 pm. And I swear we did not regret visiting the place as soon as we entered the premises. The glorious past of the colonial era was clearly evident in the intricate architectural style of the memorial.

Victoria Memorial was constructed to honour the royal queen Victoria.It was made open for the visitors in 1921. However, the foundation stone was laid down in 1906.

It was constructed on the basis of an ideology of Lord Curzon to depict the glorious past. He had initiated crowd funding for building this marvellous treasure illustrating the grandeur of the colonial era. This led to the voluntary contribution from the royalty, citizens and the British government.

An angel of victory has been erected on the dome located at the centre which is 16 feet tall and the blowing winds lead to its rotation.

Makrana Marble was used in an exquisite manner while building this monument which was procured from Jodhpur, Rajasthan.

The cheif architect of the building was William Emerson who was the president of the Royal Institute of British Architects.The Scottish physician and the botanist Sir Dravid Prain and Lord Redesdale were involved in the exotic design of the garden which covers an area of 64 acres. Anyone can actually bet about the beauty of these well maintained and lush green gardens.

The most elating aspect about them that attracts the attention of all the tourists is the scenic and the photogenic view of the garden. The entire garden area of Victoria is indeed a visual treat for the visitors. The glimpses of the lush green gardens rejuvenated our psyche.

We could not hold ourselves back from capturing those memorable moments of happiness. You must not miss this rare opportunity in an era where gardens have become a rare sight due to the increasing urbanization and industrialization across the country.

The historical monument subsumes within itself 25 galleries. The major galleries consists of the Royal gallery, the Sculpture gallery and the Calcutta gallery. Another chief attraction for the tourists is the light and sound show which can surely take anyone back to the colonial era.

The entry ticket for Indian citizens to visit Victoria memorial costs Rs.30.The price is Rs.100 for SAARC citizens and Rs.500 for foreign nationals. The timings of visiting the memorial are 10.00 am – 6.00 pm from Tuesday to Friday and the weekend timings are 10.00 am – 8.00 pm. The best time to visit the memorial is between October and March.

The onlookers may perceive Victoria memorial as yet another monument on their travel itinerary of Kolkata. But, a curious visitor can surely emphasize upon its uniqueness along with its aesthetic nature. The number of attractions for the tourists over there are too good to be missed!!!

Through our visit to the Victoria memorial, we not only encountered the unique architectural style from the British times but also experienced the joy of undertaking the horse carriage ride around the monument. Our hearts were filled with inexplicable happiness when we stepped up on the carriage to replicate our experience with that of the royal families. This made this visit much more than the usual sightseeing.

Victoria also has a peculiar attraction in store for all its visitors. An even more exciting aspect about that attraction is its magical capability to take us back to our respective childhood and help us fulfil one of our most prominent dreams as a child i.e. to take a ride on the horse carriages.

These horse carriage rides underwent a remarkable transformation through the sincere efforts of D.Sen & Co. This company modified an ordinary horse carriage by refurbishing it as a royal carriage with air conditioning facility and a thick transparent curtain around the carriage. The owner of the company conceptualised this idea based on the matrimonial ceremony of Prince William and Catherine Middleton of the Royal family of Britain. This initiative added an aesthetic and innovative characteristic to the tradition of riding horse carriages in the vicinity of Victoria Memorial.

There are two major routes followed for undertaking horse carriage rides at Victoria Memorial. One route extends through the road surrounds the Fort William. The other route covers a distance till Princep Ghat. The price charged for the ride from the tourists depends on the route and the presence or absence of the  air conditioning facility inside the carriage.

On our way back to Victoria, we packed up the mishtis (as Bengalis call it) from Girish Chandra Sweets. While we were heading towards our car after getting our sweets packed from the shop, Mom mentioned about Flurys- a popular confectionary of Kolkata.

We reached Park Street at 7.00 pm and we rushed towards Flurys as the devoted foodies to add an enthralling experience to our travel chronicles.

The beginning of Flurys dates back to 1927. It was founded by a Swiss based couple Joseph and Freida Flury. Flurys is not another bakery shop. It is a heritage shop which has witnessed the British customers since the colonial times.

The exotic nature of the ingredients used for producing the traditional products of Flurys appeals the clients of this pastry shop. For instance, the French butter is the key ingredient of majority of the specialities of Flurys.

Majority of the products offered at Flurys consist of the traditional items that is preferred by its customers spread across five generations. The fact that customers are not willing to embrace even the slightest deviation in the taste of the dishes even in this huge span of time has kept alive the legacy of Flurys.

The Everlasting Preference for Flurys

In the world of confectioneries, the preference for Flurys is a perfect illustration of the famous connotation-“Survival of the Fittest”!!!The immensely sweet gustatory buds of the Bengalis are satiated with the heavenly taste offered at Flurys. The affection of the clients with Flurys can be guaged by popularity of Flurys at Kolkata even during the times of ever growing loyal customer base of Starbucks and Cafe Coffee Day throughout India.

We were truly impressed with the luxurious ambience of Flurys. At the same time, we relished the exclusively prepared Black Forest Pastry, Strawberry Pastry, Lemon Tart and the scrumptious patties over there. We could not thank Mom enough for this heavenly experience. Our visit to Flurys gave it a permanent spot in our travel bucket list. Also, a great chunk of our affection for the traditional Bengali sweets shifted towards the yummy dishes of Flurys!!

So, what are you waiting for??? Plan a trip to the city of joy and gather your share of unforgettable memories. Thank me later!!! 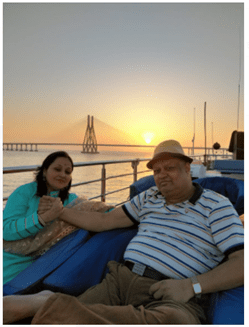